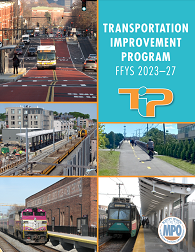 Adjustment One proposed a change in the budget for project #S12704, Chenery Middle School Bicycle Parking in Belmont. This budget for this project, funded in FFY 2023, was increased to reflect an updated vendor quote resulting from an increase in the cost of raw materials necessary to construct the project. To offset this change in FFY 2023, a portion of the funding for project #607777, Rehabilitation of Mount Auburn Street in Watertown, was shifted from FFY 2023 into FFY 2024. The overall project budget remains the same. For more information, refer to the Adjustment One (PDF) table.

Amendment One proposed changes to transit projects in the current TIP to reflect updates made to the MBTA’s Capital Investment Plan (CIP) between the endorsement of the FFY 2023–27 TIP by the MPO on May 26, 2022 and the October 20, 2022 MPO Meeting. The 16 line items included in this amendment included the carry-forward of unobligated FFY 2022 funding into FFY 2023, the programming of new projects that were recipients of federal discretionary grant awards, and funding shifts to reflect changes in project readiness and anticipated annual spending by the MBTA. Included among the projects added as a result of a federal discretionary grant award is the Lynnway Multimodal Corridor, a recipient of a Rebuilding American Infrastructure with Sustainability and Equity Grant. No highway projects were impacted by this Amendment. For more information, refer to the Amendment One (PDF) table.

Adjustment Two proposed funding source adjustments for project #608348, Reconstruction of Bridge Street in Beverly. The budget for this project, funded in FFY 2023, was unchanged. Project #608562, Signal and Intersection Improvements on Interstate 93 at Mystic Avenue and McGrath Highway in Somerville, had its budget increased to reflect an updated estimate of cost resulting from the completion of a design stage. The project is funded with statewide highway funding in FFY 2024. The adjustment also included clerical changes to project descriptions for the MWRTA. For more information, refer to the Adjustment Two (PDF) table.

Amendment Two proposed four project changes to FFY 2023 Statewide Highway Program for updated engineer cost estimates. The scopes of work for two projects, #607899, Pedestrian Improvements along Bussey Street in Dedham, and #610726, Interstate Pavement Preservation on I-93 in six communities, were expanded to bundle improvements to bridges and culverts within the limits of paving. Amendment Two also included two changes to regional transit authority projects resulting from the annual reapportionment of Federal Transit Administration funds through the “Split Letter” for the Boston Urbanized Area, and the programming of federal USDOT Community Project Funding/Congressionally Directed Spending to fund design of the Assabet River Rail Trail Extension in Stow. For more information, refer to the Amendment Two (PDF) table.

In the spring of 2021, the MPO board voted to create an Ad Hoc Committee to explore the ongoing issue of cost increases for programmed TIP projects. The goal of the committee was to explore the causes and consequences of cost increases for projects that the MPO funds and recommend possible policy changes to the full MPO board. The committee was chaired by the MPO board’s vice-chair, representing the Metropolitan Area Planning Council, and had eight members representing MassDOT, the Regional Transportation Advisory Council, the MBTA Advisory Board, the City of Boston, the Town of Everett, the City of Somerville, the Town of Medway, and the Town of Rockland.

The committee met six times, ultimately voting to recommend a set of policies to the full MPO board. This fact sheet (PDF) fact sheet (HTML) outlines proposed policy changes to the TIP process. This proposal is available in a more detailed format in a memo (PDF) memo (HTML) submitted to the MPO board for consideration at the board’s meeting on Thursday, September 23, 2021. At that meeting, the board voted to release this proposal for public review. The public comment period closed at 5:00 PM on Monday, October 18, 2021. The committee met on October 21, 2021, to review public comments. The MPO voted to endorse the new policies at its meeting on November 4, 2021. The MPO applied the new policies for the first time during the development of the FFYs 2023–27 TIP, which was endorsed by the MPO on May 26, 2022.

The MPO must publish a complete list of obligated projects within 90 days after the close of the FFY. Obligated projects are projects that have funds committed to them through the approval of a construction contract. The list includes the amount of money approved in the TIP, the total amount obligated, and the remaining balance for each project or program. The FFY 2022 Federal Obligation Report (PDF) lists the MassDOT, MBTA, MWRTA, and CATA projects within the MPO area that spent federal funds during FFY 2022 (October 1, 2021–September 30, 2022). Federal obligation reports from previous FFYs may be found in the TIP Archive.

Older TIP documents and the lists of projects that were advertised for construction in prior years are available in the archive.